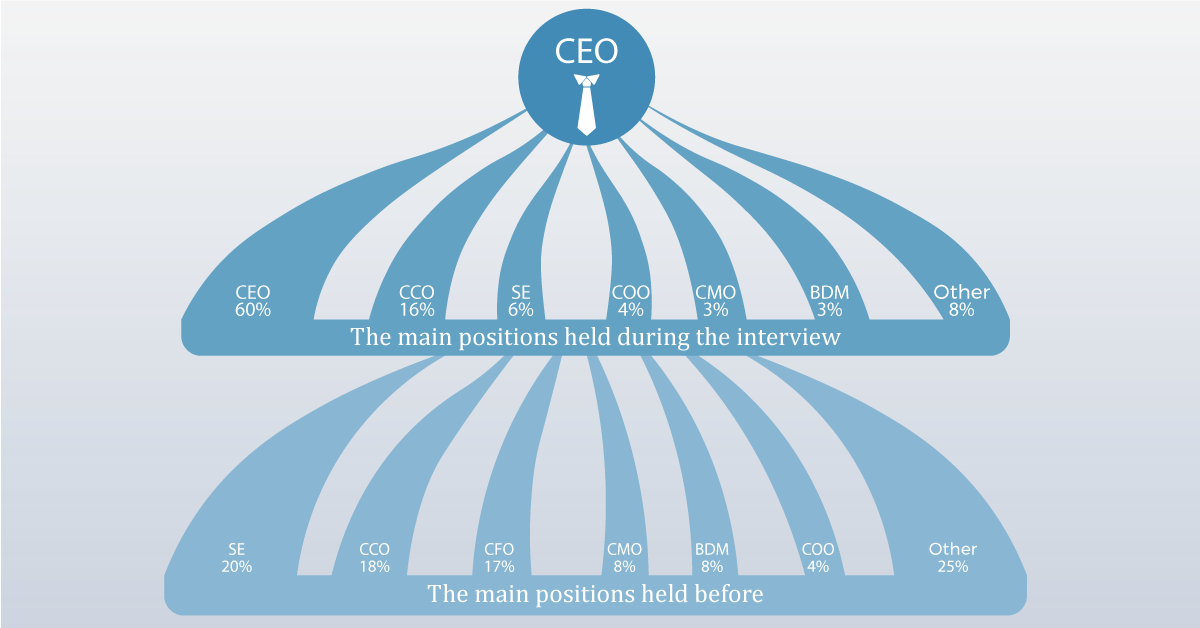 Relevant is already one-year-old. Over this year, we have managed to collect enough data based on which we can conduct an analysis and find out the path to a CEO’s career. It should be noted that we have used only the data of contenders for CEO positions for the analysis without considering the data of candidates for any department head or mid-level manager. In this entry, we’ll present which specialists are most often considered and hired for CEO positions.

Carving out a career as chief officer of marketing, finance, commerce or any other department seems obvious: one should specialize in the field, start working in the department, and get promoted over the years of successful performance, finally heading the department. However, practice shows that in the case of a CEO’s career the logic is different. Our partner companies submit professional requirements needed for the future CEO together with the application. Based on these requirements, we start searching among incumbent CEOs as well as those who have the needed skills.

Thus, studying the career of those who Relevant interviewed for CEO positions we can present what positions were held by the candidates at the moment of interviewing and which was the position they had held before that one. In other words, this analysis will help those aspiring to become CEOs to know which 2 main positions usually precede that of a CEO. (See image 1)

The main positions held during the interview

According to our analysis, 60% of the considered CEO candidates were working as CEOs at the moment of the interview, while 16% were Chief Commercial Officers (CCO), 6% - Sales Executives, 4% - Chief Operations Officers (COO). Chief Marketing Officers (CMO) and Business Development Managers (BDM) got 3% each, and the specialists with 2% and below are grouped under other positions making an overall 8%.

The main positions held before

The CEO contenders were previously holding the following positions: top 1 was the Sales Executive with 20%, CCO – 18%, Chief Financial Officer(CFO) – 17%. CMO and BDM got 8% each, while those with previous COO positions made 4%. 25% of the candidates had other positions before, each making less than 3%.

As the diagram shows, the share of COO is quite modest among other positions, while in developed countries they r are very likely to become CEOs. Perhaps, it is conditioned by the fact that the tasks of CEOs in Armenia are quite unclear and ambiguous. In many companies, the owners themselves take up many decision-making and management functions while CEOs deal with all the operations duties. As a result, many companies simply do not have the position of a COO as its duties are carried out by CEOs.

It is also interesting to note the CFO statistics. The factual percentage of CFOs at the moment of the interview made 0.5% which we included in other positions, while in previous positions group the CFOs are already the third with 17%. It should also be highlighted that the majority of CFOs in this 17% are now in the list of CEOs with the highest scores.

So, what can we conclude? CFOs rarely are offered to become CEOs. Instead, they are more likely to be promoted to CEO positions within the same organization.

The statistics just provide facts about the past; however, you are the master of your future.